If you have been following my recent posts here, you know that I was adopted as an infant. I had a roof over my head, clothes on my body, food in my stomach, an opportunity for education. What I did not have was a sense of belonging. Memories of that are quite strong for me right now because of finding my roots and my family of origin.

In that context, recent news events have had a particularly strong impact on me. I cry for those families on the border. My biological mother freely gave me up for adoption with the hope, I'm sure, that she was doing what was best for me. Those parents crossing the border into the U.S. were doing so because they believed they were doing what was best for their children -- taking them from an environment where their children were in constant danger of murder, rape, and other atrocities. I sincerely doubt they realized they were bringing their children to a country where they would face incarceration and separation from their parents.
There have been references to the Japanese internment camps in the U.S. during World War II. There, it is my understanding that families were housed together. While many Jewish families sent their children off in groups to England, the U.S. and other countries with no assurance they would be reunited, it was the intent of the parents to do the best thing for their children. Not even the Nazis effected such total and complete separation of children from their parents. Aside from the terrible medical "experiments" the Nazis committed on some children, it seems some children were kept with their family units, sometimes even to the ovens.
It is bad enough that the U.S. government is dividing families of undocumented immigrants, asylum seekers, etc., but these are not temporary divisions. It is becoming apparent that there is no system in place to reconnect these divided families. There have been unbelievable stories of thousands of "lost" children, children who cannot be found in the records and cannot be reunited with their families. Now we hear that there is no effort made to set up a system so that families can be reunited. We have babies in internment facilities, "tender age" housing, whose parents have already been deported. Those parents are unable to search for their children, the government has no means of returning those children to their parents outside the U.S.
I had a "fairy tale" of loving parents hit on hard times who lovingly trusted their daughter to a good German Lutheran home to be raised as they wished they could have raised her. These children in internment camps in Texas have no such fairy tale. If they are very, very lucky, they will be reunited with their biological families. They may face horrors in their countries of origin, but they will face them with at least one parent. Some children in these camps may be lucky to be adopted to loving families, maybe to families that will be willing to help the find their biological families. Others will not be so lucky. They may be placed in foster families, maybe in a string of foster families. But, no matter what happens to these innocent children, they have already been traumatized, their lives will never be the same. They will never have even the illusion of safety again. Some of them will be like me, not knowing where they got their thick thighs, slightly lopsided smile, or sense of humor. Some of them may have the better life their parents wished for them, but it will be a better life with little missing pieces where their birth families should have been. Maybe it will haunt them, maybe it will not
The U.S. was a land of hope and opportunity to all my grandparents, biological and adopted, when they fled Kaiser Wilhelm II's Germany. It is sad that the current administration is making the U.S. an isolated and frightening place. I have registered my concerns with my Congressional delegation. I urge you to do the same. We must return to humane and sane immigration policies. Furthermore, we must provide strong support services to children who cannot be returned to their families as a result of the U.S. actions.
NOTE: As of the time of posting, the White House and Congress are signaling a possible end to the policy of separating families. There is no indication that there will be any reparation of families already destroyed.
Posted by Deborah Sampson at 11:58:00 AM No comments:

I just talked to my sister for more than three hours! That sentence brings tears to my eyes. You see, I've never touched this sister, never knew she existed until a couple of weeks ago. And she never knew she had a half-sister on her mother's side. We met through the magic of DNA and it is a most amazing experience.
AncestryDNA calls us 1st cousins, but she's convinced and I have to agree, we are actually half-sisters. She has always known about a half-brother two years older than me who lived with her family and grandparents. That she had a half-sister was never mentioned, never even hinted. All the people who would have known the true story are dead, but all roads lead Kathy and I to believe we are half-sisters and, as Kathy said, "We can call ourselves sisters, and if there's ever evidence to prove otherwise, we can still call ourselves sisters."
This is my mother in about 2000. I never imagined I would ever know what my biological mother looked like. I don't know that I ever even really daydreamed about her as a real person. As I look through family pictures, I know where I got my hair color. I wonder if her eyes switched between blue and green depending on mood and clothing color. I'll have to ask Kathy.
And my sister! We talked and talked. Neither of us cared much about dolls, but her/my mother made extravagent outfits for her Barbie. I still have my original Barbie, but the only outfit is her black and white striped swimsuit. I know I had other clothes, but I no longer have them. Kathy was the tomboy sister. I was the indoor sister, maybe, at least physically, the more timid sister. I loved horses, but she owned one. She rode motorcycles and did a lot more sailing than I did. She's obviously very intelligent, but I might be more bookish.
We agree that we might have fought a lot because we are both a bit outspoken, but that we would also have been close. We have so many things in common and so many very different experiences. She almost went to the same college I attended. We would have known each other, at least known of each other. Would we have recognized each other?
It's all suddenly so very real, but so sudden that there is still much to process for all of us. I haven't spoken to my half-brother at all. I have a new-to-me niece in the town where I live. So there is much still to explore, a whole family with which to develop relationship.
Kathy and I are beginning to make plans to visit each other and thinking about even traveling together to see the ancestral hometown in Germany. In some ways, it seems that things are moving at warp speed, but we have a lot of lost years of sisterhood to make up for.
Posted by Deborah Sampson at 10:15:00 PM No comments: 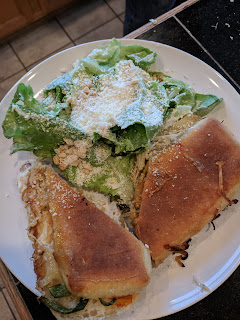 I kept hearing about Hello Fresh, then Blue Apron and Home Chef and the rest of this fast developing genre of home cook deliveries.
We started Hello Fresh. I noticed that my kitchen-averse husband started hanging around on Thursdays when the Hello Fresh box arrived, even stayed in the kitchen when the cooking began. Gradually, he took on more and more of the work until we became quite a team. When I was away at a meeting for two nights, he picked the meal he thought he could do by himself and texted me pictures of the finished dinner. It was worth it just to awaken his fledgling culinary interest.
Then Hello Fresh meals started repeating. I mean, new meals were a rarity. So we decided to try Blue Apron. The recipes were comparable, the instructions perhaps less clear. We got off to a bad start with them when to bags of ingredients essential to two of the meals the first week were missing from 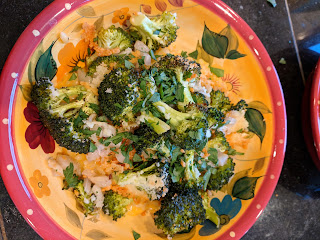 our shipment. They graciously gave us the next week free and the meals were good. The package arrives with all the ingredients together in the box and a bag of small items for each dish. We were spoiled by Hello Fresh shipping everything (except "meat" items) in a bag for each meal, so the Blue Apron box seemed more complex, checking off each item and putting it with the others for that meal.
Now that we'd tried two of these services, we tried a third. We were diappointed, so we're trying a fourth next week.
There are subtle and not so subtle differences among these services, so I've decided to check out several more of them and compile my notes for this blog.
So, be watching. In the meantime, I'd love to hear your impressions of the services like this that you have tried. 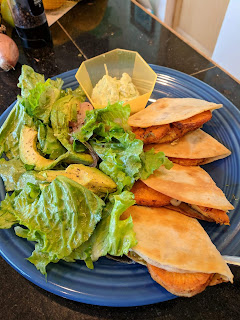