It had been an idea for a while now. Even before the surgeries, we knew we were going to need a single story home. And after the surgeries, particularly the femur tumor, the  advantages of single-level life were apparent. Then, housing prices in Denver skyrocketed and we knew it was time.

We learned about Swedish Death Cleaning where you get rid of things you don't use and that you can pretty much guarantee the next generation doesn't want. We filled a pickup truck to the brim and that was just the kitchen. I boxed up clothes until my clothes were way less than half the clothes in the closet. I discarded the research for my Master's thesis, and copies of all the courses I developed. I thought I had eliminated my share of the clutter. I was ready!

Friends moved to an active 55+ community in Albuquerque that we had liked five years before. The prices were still relatively low there and we started following the sales in the neighborhood. We toured a house on Facetime and fell in like with it. A neighbor had friends looking for a house like ours. We sold that house and bought this one in a single day. That's not to say it was easy to make the move. There sere repairs to make on the old house and repairs to request on the new house. The negotiating drove me to distraction. 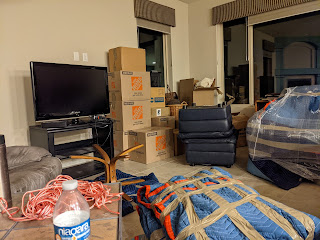 Our living room the first day.
At last, we were moved in. Or partially moved in. Despite all the cleaning we thought we did, we needed a second truck r husband's clothes that haven't fit him for 10+ years. At least I packed four days of clothes for the move and the workout clothes made it on the first truck 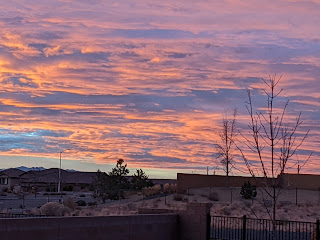 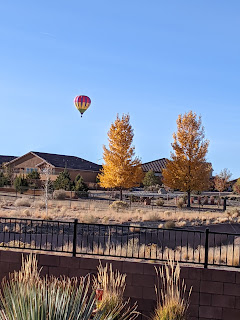 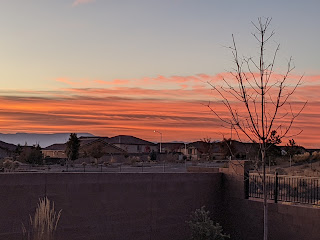 Sunsets, hot air balloons and sunrises are regular reminders that, despite the craziness and continuing unpacking, the move is worth it. In addition to the beauty, living in an active 55+ community means an immediate group for activities, wine tasting, ladies who lunch and men's lunches. Our common thread is our age, but we're finding a lot of folks who love to travel as much as we do, maybe even more. We're already thinking about a cruise on the Douro River in Portugal when we feel more comfortable with the direction of the pandemic.

So, don't be surprised if I add a new obsession to the old ones...

Twelve years ago, inspired by the inauguration of our first Black American President, I started this blog. At times, it has been highly political; at others, it has been much more a food blog; I have spent little time on religion, though it is integral to my entire life. Most recently, I've spent much time describing personal journeys I did not even dream could happen 12 years ago -- my DNA journey to biological relatives and my experience rehabbing from surgery to replace some of my leg with a partial prosthetic femur.

Tonight, I eagerly anticipate the inauguration of another president, a man who was inaugurated as Vice-President of the United States the day of my first blog post. Tomorrow, my country will inaugurate three firsts in a single Vice-President: a woman, a black and an Asian in the single person of Kamala Harris.

I freely admit that I am thrilled to say goodbye to the 45th President and all the evil he represented in our White House. Because of his administration, there are thousands of young children separated from their parents with whom they may never be reunited. Because of him, our country has lost its status throughout the world. When I traveled to Germany to meet my newly identified relatives, I saw in a police station the depths to which my country's reputation had fallen. BTW, I was at the police station because my cousin is a police officer, so in a personal situation rather than a professional one. I've experienced a president who never acknowledged that he lost the election fair and square and who incited an insurrection by nearly 1,000 of his followers who invaded the Capitol building of my country.

Many of us are nervous despite 20,000 National Guard personnel to protect our new President and Vice-President. Our outgoing mercurial president may have other things planned to disrupt the ceremony tomorrow. He is not following the norms and niceties of tradition in our country. He has no respect for what is right.

The other interruption in normalcy is a pandemic largely out of control because the outgoing president ignored the problem, preferring to promote witchcraft fixes liek injecting bleach and other "treatments" proven not just ill advised, but dangerous. Yet, when he got the virus, he had the latest, greatest and most effective treatments available.

Twelve years ago, I was optimistic, hopeful, excited. While I am hopeful about the next four years as a return to norms and a rational President, I am saddened that, because of Coronavirus COVID-19, the scene will not be the normal inauguration with all the pomp, celebration, cheers, and such that has surrounded previous inaugurations. Our new President has wanted to be president for decades. Tomorrow is his day, but it will be a mere shadow of what he might have hoped it would be. What we all may have hoped it would be.

So I intend that this blog will be revitalized. I'll spend more time on my faith, some time on what this pandemic has meant for my life, maybe some time on the great political division in this country. I intend to return to my original mission of this blog about My Magnificent Obsessions, but with the flexibility to discuss my newly identified ancestry. I have no information on my biological father other than having a significant Scots/Welsh/Irish blood. When the pandemic permits travel, I hope to explore those countries.