We've been going to Mount Crested Butte for the week starting Labor Day weekend for more than ten years. While the stated purpose of our trip is the annual Consultants' Camp, the reality is the peace of Crested Butte. Even the year they raised the beams on what is now the Grand Lodge, even the year they demolished the old, old, old motel, even the year the World Music Fest folks were everywhere, we just relax there in a way we rarely relax elsewhere.
Consultants' Camp campers have some planned or traditional meals. Brian Lawrence takes pizza to a whole new level and Ron Thompson accompanies it with beer tasting. Alan and Judy Cox, owners of the Nordic Inn where we hold our camp, welcome us with an opening dinner and say farewell with a traditionally rainy barbecue. Many campers look forward to a fried chicken dinner at Slogar's. That still leaves a couple of free evenings for dining. Typically, we spend some time at Avalanche for basic bar and grill food. Frankly, interesting and adventuresome food has been a bit lacking other than Brian's pizza. There are some nice places down in the town, but the selection on Mount Crested Butte in the off season is tricky. This year I read several great reviews of a place called Django's and I corralled a group to walk half a block down the hill to the relatively new Mountaineer Square. The five of us had a great evening, a bit cool in the outdoor area but far from the heater, but we loved the food. I completely forgot the camera, so I spent a lot of time trying to figure out how to get pictures of the food. Another group wandered down to Django's on my recommendation. They brought down before and after pictures of what I imagine was Venison Loin, encrusted
with Grains of Paradise, Blackberry Whiskey sauce, and 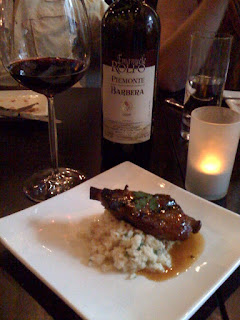 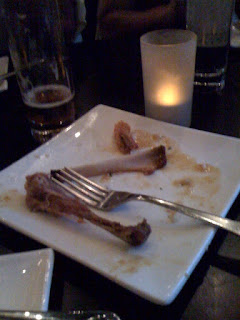 These were great pictures, but what I really wanted was to eat at Django's again, so, on Wednesday night when my spouse was off for chicken and mashed potatoes and all those down-home treats he loves, I rounded up a my friend, Ron Thompson, to eat with me at Django's.


If you can, go to Django's with a group so you can share many of the tasty morsels. That said, Ron and I managed to enjoy quite a number of wonderful dishes. We started with Peruvian Piquillo Peppers stuffed with creamy Mascarpone, Gorgonzola, Lemon zest, and Herb salt because they were out of the ingredients on my earlier visit. 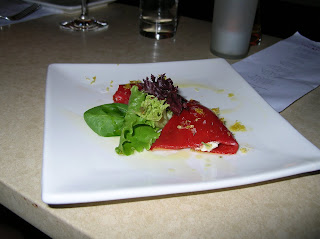 These were a lovely contrast in texture. There was no real crunch, but there was the slick texture and slightly piquant taste of the peppers against the creamy smoothness of the cheese. My slight criticism is that I would have served this dish just a tiny bit closer to room temperature so the full flavors would be readily available. Django's does not offer wines by the glass, but by the quartile (approximately 1/3 bottle). We shared a quartile of Pascual Toso Estate Bottled Torrontes Mendoza, 2007 Argentina as our first wine.
On my earlier visit, five of us shared the three little risotto cakes topped with fried quail eggs in an order of Arancini with Quail Eggs, not nearly enough to truly enjoy the lush risotto cakes and certainly not enough to appreciate the Idiazabal fondue and black garlic accompanying them. On my second trip, these were a must order! My friend enjoyed the chorizo on the dish and the two of us were amazed at the addition the black garlic made to the dish, something I had missed on my first visit. 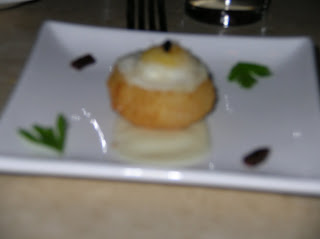 I didn't realize how out of focus my picture was when I took it and that makes me feel bad, because they made an extra one just for my picture!
I am always nervous around Brussel sprouts because my mother used to murder them with an hour cooking in a pressure cooker, but the Crispy Brussels Sprouts, Fresh Apples, Crème Fraîche, Apple Cider reduction, and Pistachios dish was a true delight! The apples added a sweet contrast to the earthy and crispy Brussel sprouts. The apple cider reduction and pistachios continued the sweet-tart, crispy-smooth contrast going on in the dish. There was just a tiny touch of crème fraîche that left us wanting more. 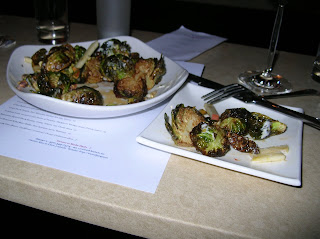 We split a quartile of Fanetti Vino Nobile di Montepulciano Riserva, 2003 Italy for our last courses. Just a tiny quarrel, we would have liked new plates at this point. After a few dishes, the plates are littered with the lovely tastes of the previous dishes and a clean plate would mean fewer carry over tastes. For my main dish, I repeated a favorite from my previous trip, a pecan-encrusted goat cheese with a delightful kumquat-cranberry compote to be eaten on lavosh. 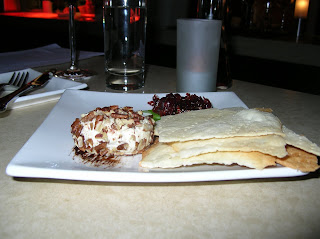 The kumquat-cranberry combination was another contrast for the sweet pecan and goat cheese combination. I teased them a bit about using a California chevre when there are such lovely ones avialbel from Colorado cheesemakers, Haystack in Longmont and Jumping Good Goat just over Cottonwood Pass in Buena Vista. They pointed out that Buena Vista might as well be in another state in the winter when the pass is closed.
Ron told me the seared lamb carpaccio served with a salad of heirloom-cherry tomatoes and shaved manchego with a pomegranate gastrique was great. I trust his opinion. I can say the pomegranate gastrique was a lovely one with just a subtle difference from something like a balsalmic reduction which is so common these days. 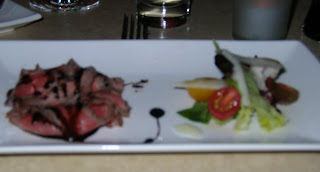 There was a dessert special for 09/09/09, but not even two normally priced $7 desserts for $9 could tempt us to eat another bite. I do hope to meet up with the almond-pear tart someday, but on that particular evening, neither of us could indulge in more than a double espresso. 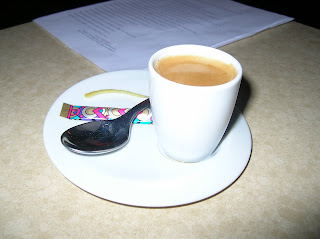