We're not trendsetters. We are decidedly not trendsetters. Normally, no matter how appealing the press, we wait a year or so for the crowd to thin out before we visit a restaurant. There are restaurants at the local mall that have been appealing to us since they first opened and I think that was more than a year ago. So what, pray tell, led us to a brand-new, just opened the day before restaurant?
We're planning a vacation in Mexico and there was this article about a new restaurant that offered high-end Mexican food and, most importantly, OpenTable found us a reservation time that worked for us.
So now you have the long story of how two old fogeys found themselves at El Diablo, 101 Broadway, Denver on it's second evening of official opening.
My advice, don't go unless you have time and don't expect to carry on a conversation. As is the current trend, the acoustics are lively and the room is noisy. At the risk of sounding even more old fogey than I already have, I am not a fan of noisy restaurants. As for needing a lot of time, the menu offers a lot of choices, even when the Tortas and Combinaciones sections are not available as was the case on Saturday. The kitchen is small. If you take this to the logical conclusion, it takes at least half an hour to get your meal. Were the room less noisy, one could enjoy a conversation with one's dining companion and the time would fly by. In a loud room, one can only look at the interesting decor and wish the headache would go away...
The drinks are served quickly. My fellow old fogey ordered the O.G which is described as their original house margarita, made with 30/30 reposado and triple sec. All margaritas are made with fresh squeezed lime juice. The drink had a bit twinge of unpleasant aftertaste, maybe the result of not-so-great limes or something. 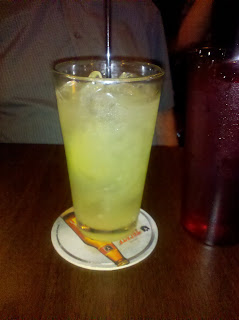 I went for the Especial, described as a coin style made with Gran Centenario Plata, Agave nectar and fresh lime juice. It was smaller, stronger and avoided the odd taste we both found in the O.G. Of course, by the time our food arrived, I had nursed my drink for far too long and the melted ice gave the drink a water-down tone. 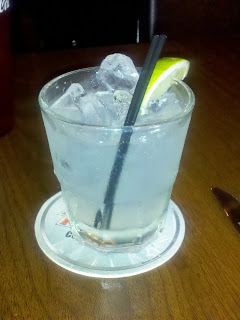 Still, I would order this drink again. One of the interesting things about the tequilas at El Diablo is that they are from small taquerias (I think I spelled that correctly) that do use only the best ingredients and do not sell in liquor stores. Also, El Diablo freely allows the customer to specify any tequila in any drink at no extra charge. The priciest of the margaritas is just $9.50, a very reasonable price in my experience.
When our meals finally arrived, they were tasty. Robert's Pecho de res, described as all day roasted organic beef brisket with chile cascabel, frijoles charros and cilantro rice, featured fork-tender brisket on a bed of rice (we didn't notice cilantro in the rice) with some beans and a couple of tortillas. There was a bit of annoying fat on the brisket which I know is typical of the cut, but it would have been nice to have had it trimmed before serving. 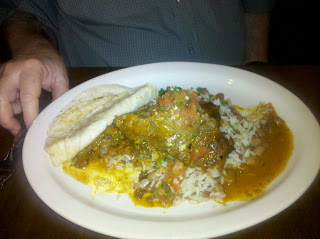 I had nice guacamole tostadas, described as crisp corn tortillas with frijoles negros, guacamole, quesco fresco, "El Diablo" salsa, rice and frijoles negros. I think the frijoles negros must be listed twice because they appear in the tostadas as well as on the side. The rice was, I suspect, a casualty of the busy small kitchen rushing too fast and too new to the large menu to remember everything that is supposed to be on the plate. 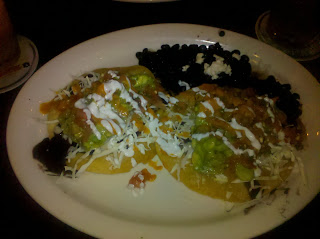 I loved the freshness of the guacamole and the crisp tortillas, but the guacamole was piled high on the tostada and it was almost too much of a good thing to have two identical tostadas. It might have been nice to have a different flavor to the second tostada for more variety or just one tostada with the promised rice.
We split a dessert of Tres Flanes, which were actually creme brule, not flan. Each little cup held a treasure of flavor, the Mexican vanilla being the favorite of both of us. I expected that Robert would prefer the Abuelita chocolate, but it was more a nice chocolate pudding than either of us expected. A more intense chocolate, perhaps with the intensifying quality of certain chiles, would have been better. The third dish described as Horchata and translated by our waiter as a much loved drink of milk and rice, was a nice dessert. I like the idea of three choices, but each needs to have more intensity. The Horchata and the vanilla were rather similar and it might be nice to switch out one of them for a tropical fruit flavor like mango, but only if it had an intensity to stand as unique among them. 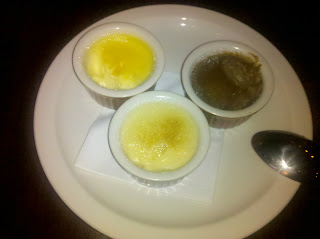 We will return in a few weeks to see how things sort out in this new restaurant, to see if the menu doubles in size as our waiter promised (and I hope it doesn't until the kitchen can handle what it has right now), and to see if the chefs make the necessary tweaks so the food lives up to its potential.

El Diablo on Urbanspoon
Posted by Deborah Sampson at 3:05:00 PM