More Ancestry than I bargained for

While my first DNA test was a cheek swab, the AncestryDNA test was a saliva experience. They assure you it is just a quarter teaspoon, but my mouth was desert dry. I filled the tube to the line, got the preservative trigger to work, and send it off. I fiddled around with the AncestryDNA website for a while, trying to bring up birth records from Oklahoma City on my birthdate, didn't have any success, and got on with a myriad of tasks for my various volunteer jobs. I actually sort of forgot about the DNA testing.
One random Saturday morning, I checked my email and saw my DNA test results. 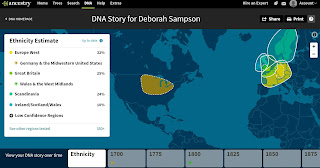 Not the almost entirely German results of the fairy tale I had been told about my biological parents. No Ashkenazi results that I thought might be there.
What was in the DNA was a pretty clear indication that I was not conceived by two married professional immigrants whose marriage did not survive the immigration, the story I had been told.
No matter how much I reminded myself that what I'd been told could be wrong, no matter how often I told myself that there may be a different story, I found nothing prepared me to confront the truth. I shocked myself with how shaken I was to find my DNA was a fairly normal Heinz 57 type of DNA.
The nationality information wasn't the only shock. Because of my rare and hereditary disease, I really didn't think I would find many, if any, relatives on one side of the family. So seeing that I had 559 relatives 4th cousin or closer who had had their DNA done by the same company was amazing. Most amazing -- I had a first cousin. I had a first cousin who lived less than 100 miles from my orphanage. Her mother's maiden name was a name that I had heard in the crazy jumble of my birth story. Did I want to make contact? Did I want to pursue this?
I'd been given up for adoption which kind of felt like rejection; I didn't fit in with the adopted family very well in looks or ambitions which was another kind of rejection; did I want to risk another rejection?
Posted by Deborah Sampson at 4:23:00 PM