I just realized that my last blog post was in August 2018! I was working on a post about meal kit deliveries from primarily vegetarian companies and I was still coming to terms with my AncestryDNA results.
Just about a month after that post, I developed excruciating pain in my left knee and entered a whole new phase of life, one where orthopedic oncologist was a familiar term. As it turns out, the tumor in my femur was not cancer, but the treatment was the same -- remove the affected part of the femur, replace it with a prosthetic area attached to rods up about half the femur, a hinged knee replacement, and a rod down the tibia. 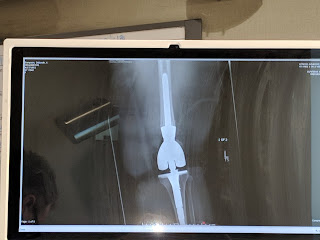 I was bound and determined to get out in time to elect the first female Bishop of the Episcopal Church in Colorado and, with much thanks to Nan Beringer and serious opioids, I was at the election convention. 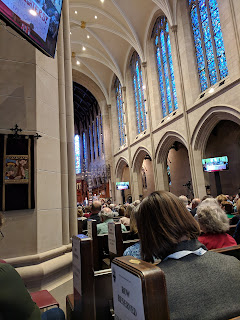 Recovering from surgery is a drag. There were the milestones -- first time out with just a walker, deciding on a cane, weaning off the cane, etc. The medical types said I could expect to recover in 6-9 months. So I didn't cancel the big trip with the new family to Europe. At 6 months post-op, I was just progressing to a cane. At 9 months, I was only using a cane for longer walks. By the end of August when we left for Europe, my trusty cane was still a necessity.
I just hit the anniversary of the surgery yesterday. I'm not sure I will ever be "normal" again. There is still pain, sometimes pretty severe, and I walk very slowly. There are times when I am sitting at the computer or reading when I do not feel the pain. Then, I move to stand up.
Sometimes I think I should have blogged the experience as it was happening, but it too often would have been a blog of depression, pain, and frustration.
So, it has been quite a year for me.