This is the place for seafood in Las Vegas

When the Sampsons and the Eichenwalds do anything together, one of the major components of the planning process involves food. Our excursion to The Lion King was no exception. The discussion began almost as soon as we got the tickets. Now, where shall we eat? Because the show was at the Mandalay Bay, it made sense to eat in that facility. We read reviews, we asked people, we tried to look at menus to assure that I could find something to eat there. We heard a lot about RM Seafood. Interestingly, after the show, Thom Smesma (Scar in The Lion King) suggested RM Seafood if we were looking for a good place to eat. Ahhhh.... even I can eat at RM Seafood. Actually, I can eat quite nicely at RM Seafood!
Our waiter was George and he was quite a personable sort. We had a fun bread basket of little biscuits and cornmeal muffins. Very homey! That bread basket set the tone for a meal that was comfortable, with food that was simple in that there were no fancy sauces and complex gimmicks, and with no pretensions. 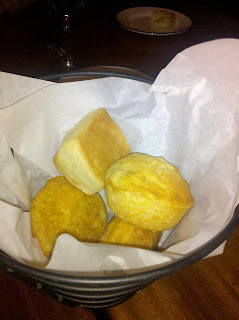 Robert and I chose Hawaiian Walu which was served with broccoli and little bits of puffed rice in a shitake-dashi broth with shitakes on top as well. 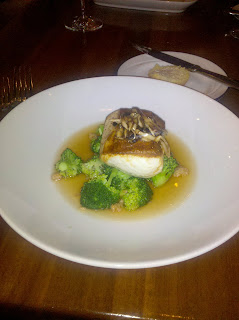 The firm-fleshed, mild fish had a little top crust formed with a soy glaze and run under the broiler. This was a dish created with a lovely light hand. The fish was the star of the dish and there was nothing to compete with it. The veggies and broth came along to add their unique flavor perspectives and it was truly enjoyable and comfortable food.
Sonia and Howard chose Diver Scallops. I tried just a tiny taste of the accompanying cauliflower gratin in which the cauliflower was clearly the point of the dish, not the sauce. The scallops sat on a golden raisin emulsion. 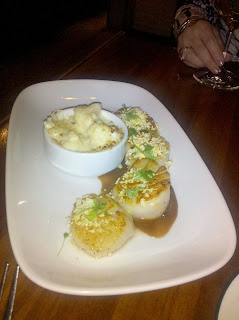 Chef Moonen used couscous as a crust on the scallops and we all marveled at such an interesting idea. Again, the theme of this dish was the simplicity that featured the fish.
The four of us agreed on a lovely Austrian Gruner Veltliner. It had a nice minerality that complimented both scallops and Walu. I am kicking myself for not recording or remembering more than the grape because I would certainly buy a few bottles when I get home. I have a vague picture of the label in my head and I hope it will serve me when I go looking for this wine. When George served the wine, we had a little conversation about the screw-top and its increasing use in the fine wine industry. George proudly pointed out that the screw-top fit well with the restaurant's policy of sustainability.
It is my habit, following a couple of times when I forgot major features of my food before I sat down to blog as I did just now when I forgot the vintner for our wine, to admit that I am a food blogger and ask for a menu to help me get things right on the blog, to admit I am a food blogger and request a paper menu to take with me. George jumped on it. He even introduced us to Rick Moonen, the man whose initials provide the name of the restaurant. He graciously discussed with us his concept in using a couscous crust for the scallops and generally answered our questions about the meal. He even agreed to pose with me for the picture below. Chef Moonen is getting a bit of national attention, so plan accordingly! 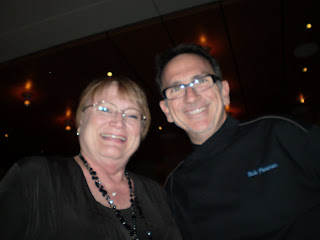 If you are in Las Vagas and looking for a superior seafood dinner, don't hesitate -- head to the Mandalay Bay and RM Seafood. It is just outside the casino in the Mandalay Marketplace for the more casual dining (about $50 a person) where we ate or up the escalators to the more formal version (around $95 a person). The official website tells me upstairs is RM Seafood and downstairs is RM Casual. Phone is 702-632-9300.
Posted by Deborah Sampson at 8:34:00 AM