Tulum and the Winter Solstice 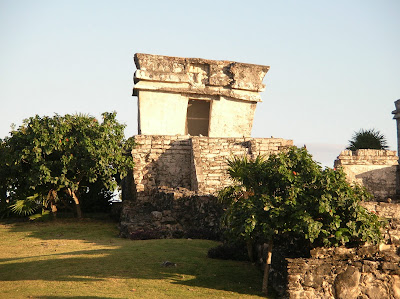 One of the best field trips we took on our Cancun vacation was to Tulum, a Mayan archeological site. We had an amazing tour guide, Alberto, who gave us a lot of great information. Tulum is unique among Mayan ruins in that, while other sites show evidence of human sacrifice, Tulum does not. Tulum was noted for its astronomical significance. The ruin pictured above has a rather small hole in it that is not, sadly, apparent from my photo. At sunrise on both summer and winter solstice, the sun lines up with the hole to produce a starburst effect.
In leap years, the moon similarly lines up. FYI, the next leap year, 2012, is the last year of the Mayan calendar.

This is the largest ruin at Tulum. 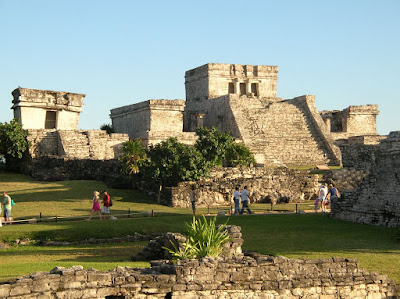 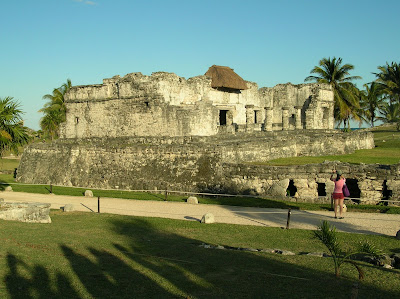 This Caribbean beach is below the cliffs behind the ruins at Tulum. It is quite a popular public beach and rather scenic to boot! 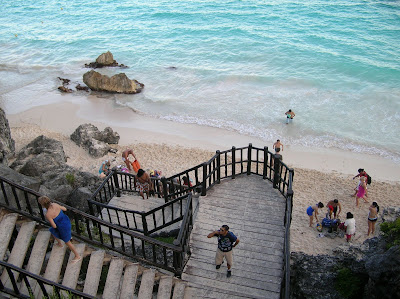 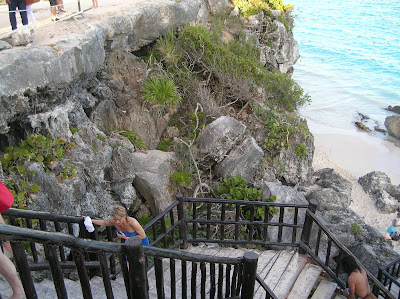 Alberto presented quite a lot if interesting information about Tulum, explaining how advanced the Mayan civilization was. He even showed pictures of Mayan dentistry involving drilling small perfectly round holes in the teeth and filling them with Jade. It was only at Tulum that the people stretched the heads of the babies, exploiting the soft spot, to elongate the skull. Perhaps that contributed to the reputation Tulum has as an intellectual center of Mayan civilization. While other Mayan ruins show evidence of human sacrifice, Tulum shows nothing like that.
I whole-heartedly recommend a trip to Tulum if you are in Cancun.