A Tale of Two Restaurants

The wildflowers are amazing in Crested Butte! So is some of the food. It is easy to find ho hum, uninspired food and those restaurants are stuffed with tourists. It is also easy to find amazing food with great attention to detail. Some of those restaurants are full of locals and tourists, others are not so fortunate.
We recently made a whirlwind trip to Crested Butte to see the wildflowers. We've taken a couple of guided wildflower hikes in the fall when one has to identify the plant by the leaf. We wanted to see the flowers in all their glory and so we did. We also wanted to enjoy the food scene during Food and Wine Week. We didn't participate in the pricey activities, but we did eat some great food.
Our first evening, we dined at the Old Croatian Restaurant in what is commonly called The Forest Queen. The founders of this new restaurant where so many other restaurants have failed through the years wanted to honor the Slavic history of the community with modern twists on the old dishes. We were a bit worried by a nearly empty restaurant at 7:30pm. We made a reservation only to discover we pretty much had the run of the place. How sad because we found the food to be very good.
One special of the day was goat cheese stuffed mushrooms on baby greens drizzled with a balsamic reduction. These were tasty nibbles! Robert is not a fan of goat cheese, but our fight over the last button was only resolved when I agreed to let him have the last of the balsamic on the greens (and he is not terribly fond of greens either). 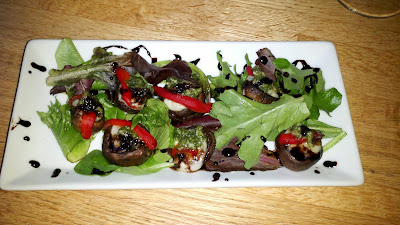 I admit that by the time I had them drop the shrimp and tomatoes from the pesto pasta, it was an awful lot of the same thing, but the nuts were buttery, the olives added texture and the pesto was excellent. If I had a kitchen there, the leftovers would have made a great lunch. 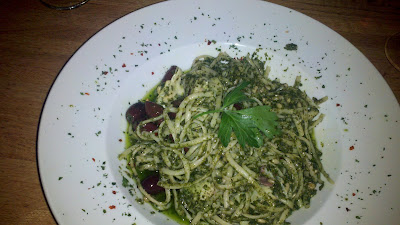 Admittedly, the leafy garnish does nothing to enhance a primarily green dish, but not even the superb and extremely popular restaurants do a great job of garnishing every dish as you will see in a later photo.
Robert is a major salmon fan, so I knew when there was a salmon special, salmon would be his choice for the evening. He is not a loquacious person, so I would take his "Fine" as words of highest praise. I loved the sugar snap peas garnished with cranberries and walnuts on his plate. On another visit, I might have made those my main course, they were so tasty with such a great variety in texture. 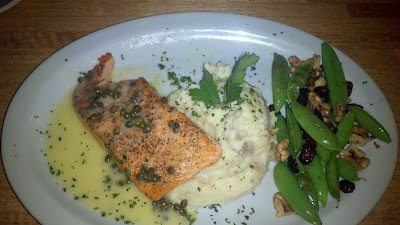 Django's up the hill is quite a different story. Ever since it opened three years ago, it has been one of the hottest seats in the area. I admit, I had no trouble getting one of the sweetheart tables on my second visit that first year, but my previous visit had been a chilly one out on the patio and not very close to an anemic heater. I couldn't wait to go back. It's been a trick getting a seat at every visit. I've slid off bar stools and gladly taken any seat I could get ever since. This time, we wanted a 6:30pm reservation and gladly settled for a table at 7:45pm. Chris, owner and front manager, has a great software system that reminds him of your previous visits and tells him your favorite table by the way.
Django's is a small plate heaven, though we have seen over the years a trend to what I call small plate entrees, meaning one could order some of the meat dishes as a very light meal. I would love just a small plate entree, if I didn't find so darn many dishes on the menu that I just have to try!
We ordered a cheese plate to start. I am sure I took a picture of the housemade farmer's cheese, Haystack "Snowball" and Manchego with lavosh, polenta crackers, olives and such, but I could not find it on the camera. We also shared a quartino of Quinta da Avaleda Vinho Verde from Portugal. One of the mystery's at Django's and a tiny little criticism here, is the order in which dishes appear. We expected that our two salads would arrive together before any other dishes, but the Mixed Lettuces with fresh blueberries, pistachios and Moody Blue (from Rogue Creamery, blue cheese smoked over fruit wood) came first, rapidly followed by the unadorned Mushroom Croquettes. The Moody Blue cheese gave a chewy quality to the salad. I'm not big on smoky foods, but this smoky cheese played well with the sweet blueberries and lettuces. The pistachios, normally a bit 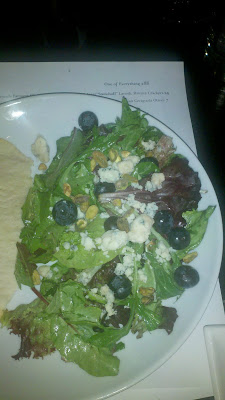 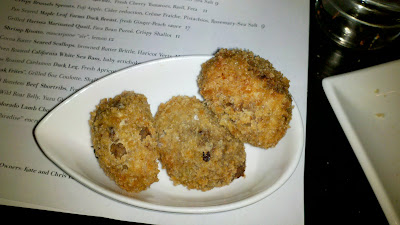 I mention the unadorned mushroom croquettes because of my earlier statement about garnish. Personally, I think these are served in a cute and tiny dish and don't need adornment, but others might disagree. The croquettes are a mix of chanterelle, crimini, shitake and hedgehog mushrooms rolled in bechamel and Pecornio.
This is another place where I might have expected the second salad, thinking they might be separating appetizers from entrees. Nope, we got the first entree, the cocoa butter seared scallops with browned butter brittle, haricot verts and a Meyer lemon confit. It was a delightful contrast in textures with smooth scallops, chewy green beans and crisp, sweet brittle. 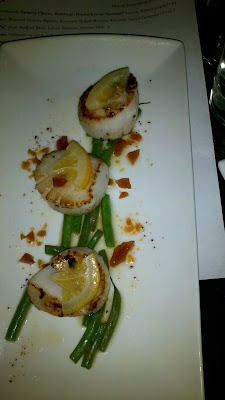 Here I have to bring up one more tiny complaint. There had been much discussion with the servers and they with the barkeeper about a wine that might stand up to ribs but still not overpower the scallops. The answer was an amazing Chateau du Petit Thouars Touraines Cabernet Franc that is on the menu as a bottle, but which they served in quartino that night. One might think after all the discussion about the appropriate with for both entrees, that the entrees would arrive together and with the Cab Franc, but...
After the scallops, we saw the second salad, wild arugula with pear, pecans and Parmigiano-Reggiano. Neither of us is particularly fond of bitter arugula, but the sweet pear and pecans countered the bitterness beautifully and I'm never going to complain about having a true Parmigiano-Reggiano on my salad (or almost anything else, for that matter). Also, the folks sitting very near us at the next table (tables are very close!) said they had loved both salads and we concur. 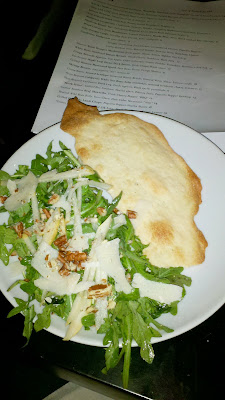 The sheets of Lavosh with the salads were welcomed to assist in dividing the salads between our plates and were downright tasty as well.
I finally savored my favorite grape, Cabernet Franc, while watching Robert (who was by then professing he couldn't eat another bite) down the Beef Shortribs, with fresh cherry-pepper "BBQ." By the description, he expected a BBQ sauce, but then we're more familiar with wet BBQ. 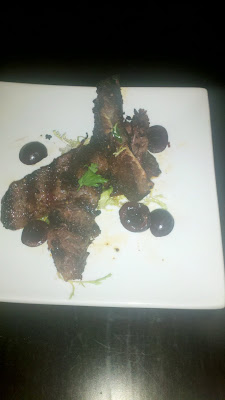 Robert professed the ribs "Great" and I'll take his word for it.
Both of us were stuffed, but I just had to try the Orange Olive Oil Cake. It was light and airy and a perfect choice for two folks who had eaten way too much already. 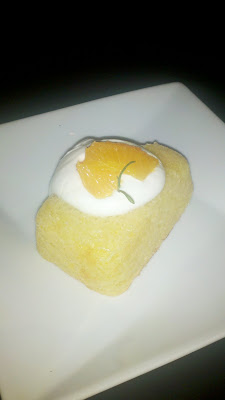 So what makes a restaurant popular? I have to admit I have little idea. I love Django's for their creativity, but there were the little service slip-ups and, face it, the little cake is washed out on that big white plate and crying out for drizzles of color around it. I am sure the service errors are caused by the small plates that means there are more dishes per table and it is harder to get them all out in a logical order for all the tables. On the other hand, the service at Old Croatian was flawless, friendly and accurate and the food we ordered, while perhaps more pedestrian than the food at Django's, was well executed.
It could be location. There are several new hotel or condo facilities on the mountain crowded with folks looking for food and faced with ho hum bar food or going down the hill to Crested Butte. Django's is a joy to them. Old Croatian is at the far end of the main drag in town, but there is good parking and a pizza joint beyond them seems to do well. Their location has seen maybe seven restaurants in the 15 or so years we've been going to Crested Butte, so perhaps people forget to look there for good food. We talked to one couple at Django's who ate at Old Croatian last winter and while she thought her dish was good, he hated his dish. He won't go back to Old Croatian. Folks in Crested Butte have so many choices, that they don't give a lot of second chances. It can be a bit unforgiving kind of place. In town there are many good to superior restaurants, so Old Croatian has more competition down in town.
While I had a couple little criticisms of Django's, they are minor and mentioned only because the restaurant is so close to perfect. I can no longer imagine going to Crested Butte without eating at Django's. Old Croatian was a good new place with serviceable food and is head and shoulders above some of the other places in town. I only hope it is there next time I am in Crested Butte.
Posted by Deborah Sampson at 11:56:00 AM