In stereotypical Episcopal fashion, half the group was at Lagarto's early, hoping to hit the happy hour before dinner. We were quite the crowd with long-timers, newbies and everything in between. Some of us knew each other very well and others of us were just meeting for the first time. We settled in with our drinks, waited for a few stragglers, turned in our orders and... covered our ears! The fire alarm went off just after the last of us ordered our meal.
We never did find out what the problem was, but soon after the siren stopped, the firetrucks arrived! 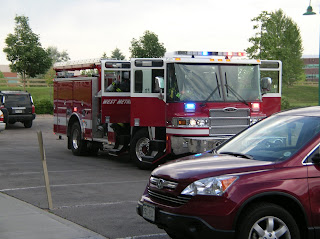 Soon there was a pair of firemen in full gear wandering in and out of the kitchen. 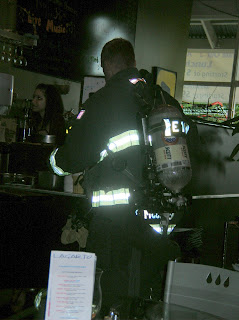 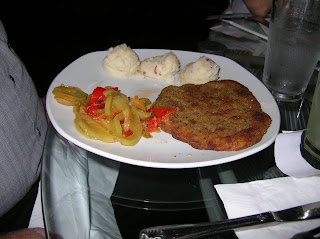 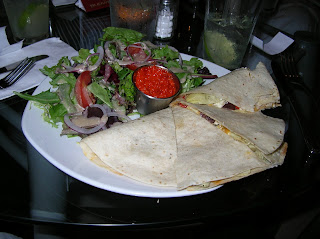 The hot pepper relish situated in the middle of the plate of Mediterranean Quesadilla was piquant, but lovely! The vegetables served with the Wiener Schnitzel looked interesting, but Robert had snarfed them down before I even got to ask for a bite! We had to leave before the music started.
Frontage roads can be tricky and the one for the Hindu Temple and Cultural Center on Wadsworth is no exception. It took a while for all of us to find a way onto the frontage road and into the parking lot. We had been led to believe we would probably be the only ones there except for our hosts, but we wound up dropping in on a monthly prayer service that we found fascinating, if very confusing to our uneducated minds. After the service, the High Priest took us aside to answer our questions and various men wandered through offering us fruits, a fruit salad eaten from our hands and bowls of rice, blessings from the service we had just observed. It was hard to understand what was happening in the service because we did not understand the language of the chants, but observing such a service was far more informative than simply reading about it or hearing about it. Several of us were struck by the elaborate sculptures of the gods displayed at the front of the worship area. The particular prayer we visited involved pouring juices, yogurt, milk, spices and such with arranging fresh fruit. The sculpture was then washed. A curtain gave privacy for that part of the service and then the sculpture was adorned with fresh flowers and again offered arrangements of fresh fruit. It was quite attractive and a far more organized ritual than one might think. I actually viewed the service as being somewhat like our liturgy.
Everyone was quite gracious to us. One member of the Temple is a convert from Christianity and he was able to offer us additional insights as he discussed his decision to become Hindu.
Posted by Deborah Sampson at 11:37:00 AM