As I said recently, a dear and wise woman was recently installed at her new parish. A hearty bunch of us from her old parish made the trek to support her. After the service, we gathered for a picture. Organizing Episcopalians often resembles herding cats and our post-service picture clearly shows that! 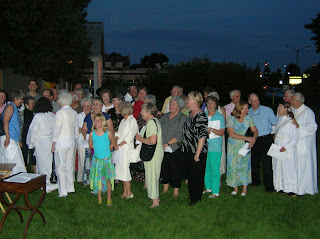 Among those not facing the camera is a dark haired woman in a white robe -- that is our friend and the newly installed rector, Rev. Bonnie Sarah Spencer.
A second picture shows different people facing the camera. In fact, Bonnie is facing the camera, but not everyone had joined the group yet, or people had already left: 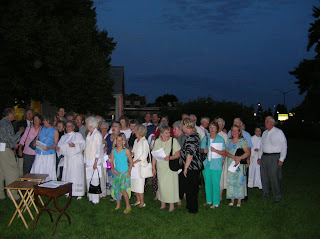 Rev. Canon Lou Blanchard preached a marvelous sermon around a theme from Henri Nouwen about the communion cup. First we hold the cup and in it we see our face reflected. In that reflection, we see the faces of those who have supported and shaped the life behind that face. Then we raise the cup, giving thanks and then we serve the cup. Those are not her exact words, but the idea of seeing in the communion cup the face, not just of the priest, but of all those who've been involved in the formation of that priest really had a power for me. I was in the back of the worship area, so this is not a great picture of Lou, but it reminds me of the sermon and how it touched me. 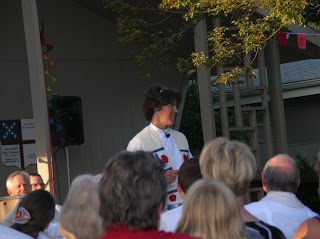