This has been a most interesting summer for participants in our adult education program. We've been studying what one of our number calls "Pillars of Faith." That is actually the title of a good DVD about Hinduism, Buddhism, Judaism, Christianity, Islam and some other faith traditions which we watched at the beginning of the summer, but I don't want to violate copyright.
At any rate, today was a day many of us have been looking forward to -- the day we attended Friday noon prayer at the Mosque. We were nervous in the way you always are when you are doing something you've never done before. The women in the group were more than a tiny bit worried about scarves. Four of us sat in the car watching for the rest of the group and for our hosts. A kind gentleman came up to the car to ask if we were looking for someone. He did not know our hosts, but he urged us to come in. Such a gracious person he was.
Eventually we got a bit more brave and wandered up to the front steps. Person after person greeted us, asked us if we needed help. They were the epitome of hospitality! Finally our hostess arrived, bringing with her the other hosts who had been waiting for us at the back door. The men went off their way and the women went up the stairs to the women's area. Andrea, our hostess and guide from the Mosaic Foundation, was gracious in explaining to us all aspects of the service and the men in our group said Hasan and Ishan were equally helpful. Not only were our assigned hosts helpful, but many other women came up to us before and after the prayers to answer our questions.
One thing that was apparent to me, sitting in the women's balcony, was the variety of cultures where Islam is practiced. Andrea is an American-born woman and in the minority. Some of the dresses reminded me very much of those worn by the Sudanese women who worship at our cathedral. Still others were distinctly Asian or Middle Eastern. The clothing and, especially the scarves, ranged from very conservative black robes to light and airy floral prints. Some of the scarves shimmered with metallic threads, others were elaborately embroidered and still others were very plain. The variety of nationalities was could be noted among the men, but it was amazingly beautiful among the women.
While none of our group understood the Arabic language, there was a beauty to the chant as it washed over us. Parts of the sermon were in English and similar messages might have been heard in many a Christian church on a Sunday morning. Much of the message was about the upcoming Ramadan with admonishments that Ramadan is a good time to quit smoking, a good time for women to adopt the practice of covering their heads, a time to give to charity -- not so very different than our priest urging us to adopt a discipline during Lent. In a very different setting than we were used to, the urging to adopt practices that bring us to a closer relationship with God was a very comfortable message. When a woman visiting from Dallas told us that whatever we needed to know, the answer was in the book (referring, of course to the Koran), it was not so different from someone telling a new convert to Christianity that the Bible is a good place to look for answers.
By the time we took a picture with our new friends, Andrea, Hasan and Ishan, we were almost comfortable in our scarves: 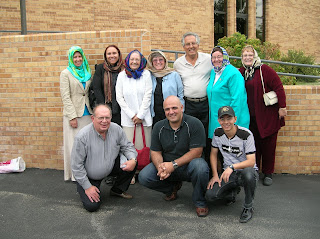 After the service, we browsed among the vendors who set up outside the Mosque with books, games, produce and such. Another woman, "call me Sam," invited us to partake of the post service meal in the fellowship hall.
If you have been following this blog at all, you'll know that the group jumped at the chance to share a meal.
My special order meal looked good: 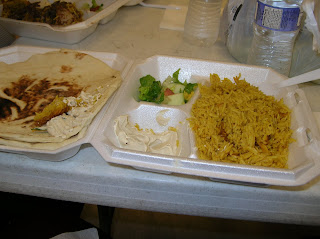 but Mike's meal with the chicken probably looked even better: 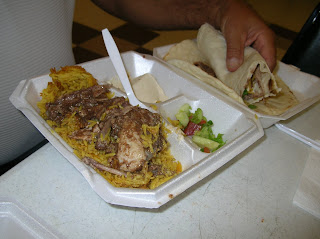 Many of us will be attending a Ramadan event with the Mosaic Foundation on September 1, so expect to hear more about our new friends.
Posted by Deborah Sampson at 5:16:00 PM