Some folks have been pointedly asking when I planned to write about our visit to Shabbat services. The simple answer is that I forgot I had not written about the excursion until I downloaded pictures today. The hard core 6 of us who went to the Hindu Temple and the Zen Center also went to Shabbat service. Shabbat is the service that spoke most directly to my heart. I'm an adopted kid whose biological parents came from Germany shortly after WW II. Their marriage did not survive the move. How odd that a marriage that survived an SS prison and who know what other challenges in the Hitler Germany, could not survive a move to the United States.
At any rate, Jewish services have always spoken to my heart. Maybe it is the sense that being Jewish is not just what you believe, but what you are.

Episcopalians are not the only ones who like to shake things up a bit in the summer. Jews, or at least the ones at the particular Temple we attend do the same. Our particular Friday included three counselors from Camp Swayder, the local Jewish camp sponsored bu that congregation. Two of the counselors were from the Tel Aviv area and one from the Golan. How interesting to hear these young people talk about learning Arabic in school, about their friends being Arab, about the expectation that they would do a tour of army duty. In fact, One of the counselors freely admitted that he gave little attention to the faith until a rough time during his Army stint when he inexplicably felt a need to do a Shabbat with his fellow soldiers in near darkness in a building where they were avoiding their enemies.
How similar that is to what I hear from my niece in Iraq -- how faith seems to take on a different perspective in a war situation.
One of the things that has become important to some of us is the fellowship of a meal before our experience of a different faith. Serioz fit our requirements of being reasonably close to the Temple, willing to take a reservation and willing to do separate checks. I was a terrible food blogger and forgot to take a picture of my wonderful veggie sandwich. I did, however, get a picture of the bunch eating. 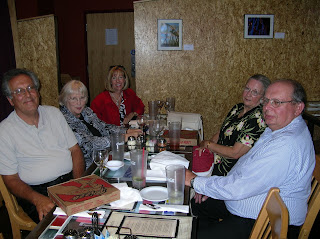