Returning to an Old Favorite

Ali Baba's on that tiny strip of Colorado Blvd. in Highlands Ranch has been a favorite middle eastern restaurant of mine almost from the time they opened. I was floored by their Baba Ganouj, which I think might be one of the best I've ever tasted. I made many meals off the appetizer page, but I sometimes wandered to the other pages of the menu to enjoy a vegetarian platter and a falafel plate.
About a year ago, two things conspired to come between me and Ali Baba. First, they hired a cook who was serviceable, but his dishes didn't make my tastebuds sing. Second, I got sick and found I just couldn't eat the way I did before.
After our trip to the Mosque last Friday, I had a hankering for baba ganouj and wandered in to my old favorite. The tables were new, but the waiter was my old friend Michael who welcomed me as if I had been there just the day before. He told me there was a new chef and there would be a new menu soon. I ordered the vegetarian platter and quickly realized there may be a new chef, but the baba ganouj was exactly how I remembered it. The stuffed grape leaves were a bit different and there were two small ones instead of the one larger one I used to get. In time, a serving of baklava magically appeared before me. "A treat from the chef," Michael told me. I told Michael I would come in after the new menu and take pictures and such for my blog.
In mere minutes, I met the new chef, Hasan, who brought me one of the new items on the menu, a spinach pie. We discussed the pros and cons of adding feta to the pie.
Yesterday, I returned with my husband to do a serious review of the restaurant. I had generous tastes of both hummus and baba ganouj. Michael swears the secret to the hummus is adding an ice cube to the blender when making it. I tried that after he told me that the first time, but I still can't match the texture. 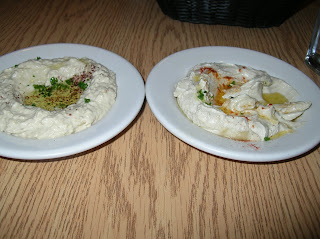 The baba ganouj is on the left and the hummus on the right. The baba is almost creamy in taste and lacks the characteristic bite one expects from lesser versions. The hummus is unbelievably smooth. Even my little taster portions allowed me plenty for leftovers. The secret to keeping the leftovers of these dishes tasting good the next day is to lay plastic wrap directly on the surface to keep the air out.
Robert ordered a dinner which came with a similar sized portion of hummus and a substantial and classic salad of lettuce, tomatoes and cucumbers in an olive oil and lemon dressing.
His main course was chicken marinated in Dijon mustard and special spices that my new best friend Hasan would not reveal. The ample portion of three half breasts was accompanied by a huge portion of very fluffy white rice appropriately garnished with parsley and a sprinkle of spices. Also on the platter, a grilled whole tomato and a mysterious dollop of something that turned out to be garlic paste. Robert is not fond of grilled tomatoes and the dollop of garlic paste didn't seem to him to be needed, but he loved the flavor of the chicken and rice. 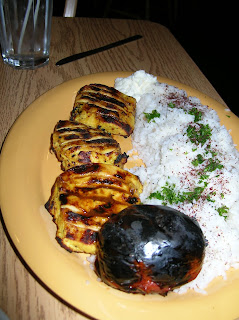 Fully half of the chicken and half of the rice made their way into a to-go box that provided a nice supper for the next evening.
My entry was, true to form, off the appetizer menu. I had two of the lovely spinach pies and found they were plenty of food for me. The crust is a nice bread that is very similar to a brioche in richness. the filling involves cooked spinach, generous application of garlic and perhaps some onion. There was a definite touch of lemon and, perhaps, a touch of olive oil. I was bemoaning the loss of two of my old favorites on the appetizer menu -- samusek and muhamara. Call me fickle, but the spinach pie has replaced them both. 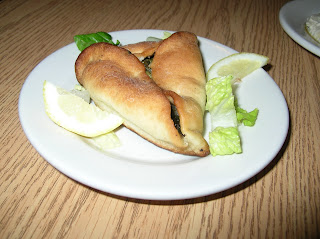 If you loved the muhamara as I did and you eat chicken, there is an interesting dish you might want to try. It is described as pieces of chicken in a sauce of pomegranate and walnuts. I tried very hard to get Robert to try it, but it is not his kind of dish.
We made generous use of the to-go boxes because I was determined we would share a piece of the delightful baklava. We wound up not sharing, but the baklava was nearly what I remembered from the previous visit. It might have been just the tiniest bit under-cooked, but there was a nice balance of crust, nuts and honey and we thoroughly enjoyed it. 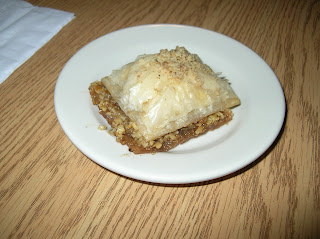 If you are hungry for Persian or Lebanese food, this is the place. There are ample options for vegetarians and maybe too many choices for meat eaters. Just be sure to leave room for the baklava!